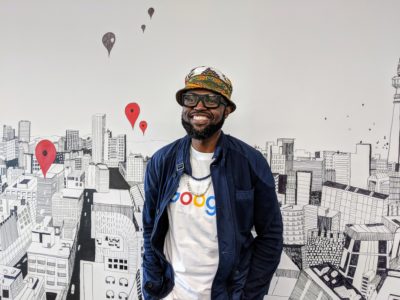 30 Oct Creativity for profit… and for good: What Google’s man in Africa has to say

Ahead of a talk that he is giving at the Loeries Creative Week, Google Africa chief marketing officer Mzamo Masito spoke to The Media Online. The chat centred on creativity and its role in both advertising and marketing and the world as a whole.

“I love creativity that rhymes with functional design, that is beautiful but is also useful. This is when it helps answer and solve a few questions,” says Masito.

He punts creativity that assists in two ways. Firstly, creativity that is used to create solutions to ending the world’s problems, including poverty, racism, prejudice and ignorance. Or creativity that challenges people’s perceptions, forcing them to think differently and unveil their own ignorance.

Secondly, he believes in creativity that promotes elements needed in the world, including empathy, equality, fairness, or justice for all.

While creativity serves these functions, the idea, Masito explains, is that it is also helps increase sales, market share, and brand equity, as well as more users and usage for a brand.

“Let’s grow the revenue, but let’s grow it in a soulful way,” he comments.

The state of creativity in SA

Masito says his recent visit to Nigeria is a great example of creativity that has taken the world by storm. Creativity coming out of Nollywood and the country’s music industry for example.

To keep South Africa’s marketing sector growing and developing, Masito stresses that there needs to be more diversity and inclusion, both on the client and agency sides.

“I feel we are not moving fast enough. There’s a lot more that needs to be done around inclusion… The agencies and the clients must be a reflection of the consumers they sell to. I don’t think we’ve cracked it yet, I still think we can produce even greater work by just increasing diversity,” Masito explains.

He lambasts the fact that female representation in the creative industries is still lacking, and says that we can’t get away from situations requiring sexual orientation and race representation.

“We as South Africans, I strongly believe, we don’t know each other yet and how do we do great creative work when we are not yet fully inclusive,” he adds.

He calls for more emotional and psychological safety, allowing people to speak their minds without fear of ridicule or being labelled as racist, chauvinistic, homophobic, sexist or another label.

Stepping away from the desk

Asked about the major trends he has seen in creativity and advertising, Masito firstly points to one that is evergreen for him. Stepping away from the desk (moving away from business) and having genuine empathy for people, gaining insights into their lives, and knowing them is important.

“You can’t do justice on creative if you don’t have empathy, and immerse yourself in people’s lives and walk in their shoes and deeply try and understand why people do the things they do,” he believes.

A mobile-first approach is another element he stresses that is vital in today’s world. While television and radio can complement mobile very well, the world is becoming increasingly mobile-centric, which creatives need to follow or be left behind.

Another trend Masito has noticed is the travelling of ideas, particularly those originating in African markets, which are spreading to the rest of the continent and overseas. He refers to this as people becoming more “continent-centric as opposed to country-centric”.

“Sometimes the clients are very much short-term orientated and there’s no fair balance between short-term and long-term brand loading equity, which sometimes stifles creativity,” says Masito. This is just one of the challenges to creatives that he identifies.

Others include creatives being stifled by an over reliance on market research by clients, getting more diverse talent in the industry, and sometimes creatives being too agreeable with the client. “It’s okay to have that healthy friction with the client and you expect a client to be respectful, but sometimes you find they are not. They throw their title at the agency, rather than debating professionally,” quips Masito.

The balance between art and science

In an ever-changing world, Masito believes the role of the chief marketing officer has also changed. Nowadays they have to live in the intersection between art and science, so focus on the creative while at the same time being business-centric and business-savvy.

Before Google Africa puts out a piece of content, the team asks the question ‘is it diverse and is it inclusive?’ If the answer is no, then the content doesn’t get published or flighted.

The company is also driving a change to content stereotypes, looking to make it more progressive, particularly the role of women. Having them in the kitchen and holding a baby is an outdated representation that needs to be quashed as there are far more ways nowadays to represent women.

Aside from this contribution, the company is also partnering with more diverse YouTube content creators across the continent, and holding masterclasses for them to improve their content.

Masito has 20-plus years of experience in the creative sector, working for the likes of Unilever, Vodacom, Nike and now Google. Each brand taught him something different with Unilever giving him the “science and grounding of great advertising and insights”, while Nike was “pure art”.

He will be presenting a talk at the upcoming Loeries DStv Seminar of Creativity, being held this Friday in Durban as part of the Loeries Creative Week. He will be reflecting on his 40 years’ experience in creativity and the lessons he has learnt along the way.