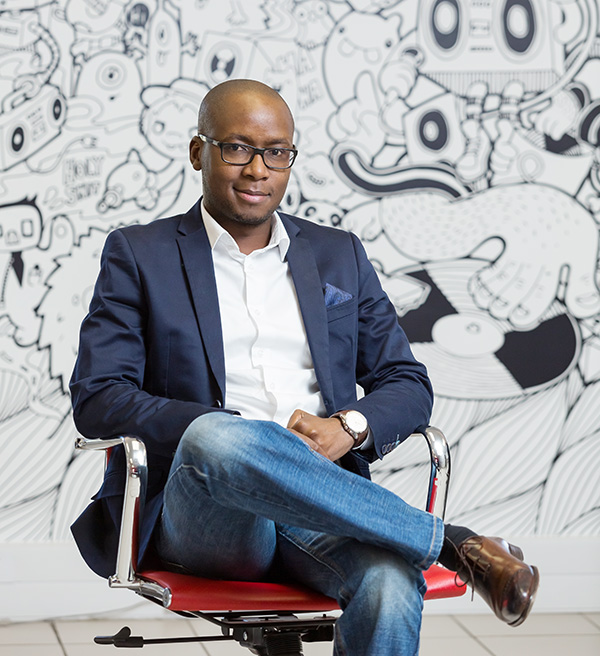 I was recently asked for an opinion on why black-owned agencies are so often excluded from lucrative requests for Proposals(RFPs). My response was fairly cryptic but the conversation made me realise that there will be some value in capturing some of these issues in an article to help buyers understand the specific issues that black-owned and operated agencies are typically challenged with.

I would like to convey some of my own thoughts, as well as that of Lufuno Makungo. However, I do believe that this is a topic that should be explored in more depth, so I will keep on sharing updates as I also ask other agency owners about their opinions and experiences on the matter.

I think it’s important to also take the following into consideration, for context: according to Nielsen AdEx research, the total advertising spend in South Africa is ±R42bn. Of this substantial amount, less than 1% is spent with all the black-owned agencies in our country combined. In practise, one could therefore assume that most of the black-owned agencies are just competing for smaller projects and are not provided with opportunities to pitch for those larger, more well-paid jobs. We believe that these are some of the reasons for it…

Lack Of Will To Transform

The figures of the Nielsen AdEx research and survey is clear proof of the fact that there is largely still a lack of will to transform. This also explains why the Department of Trade and Industry(dti) had to formally introduce the Marketing Advertising and Communication Charter (MAC Charter) in a bid to get the industry to transform. Considering that we are already more than 24 years into our new democracy, this is a sad reality.  For example, a few months ago, JSE listed MMI Holdings appointed three new agencies, none of whom were black-owned. When we contacted them to raise our concerns about their procurement process, they simply dismissed it, with no commitment to change their ways in the future. You can read the conversation here that I had with their group Head of Communications.

The excuse that is offered most often for not awarding enough business to black-owned agencies is that they lack capacity, an excuse that makes no sense whatsoever. Almost every agency operates at optimal capacity for maximum profit and they only upscale or expands their resources, as and when they win enough new business to justify it.

I am convinced that not even the likes of Ogilvy & Mather South Africa or FCB Africa will have sufficient capacity to service FNB, if they won the account right now. To do so, they will obviously immediately have to hire more staff. The reason for this is that it makes no business or financial sense to sustain unutilised resources.

This naturally means that this excuse is null and void, as any agency will have to adapt their business and obtain the necessary additional resources required to deliver efficiently on any large new account.

In SA, pitching for tenders and large projects is a costly exercise due to the resources required to conceptualise and create a campaign or proposal. We are expected to present unpaid for campaign ideas with two or three concepts just to be considered for the project.

To do so sensibly, often necessitates that we create samples to demonstrate the look and feel of such a campaign, as well as the communication channels that will be utilised. This includes designing new concepts and creating multimedia and animated explainer videos, which for example require booking and paying for a voice-over artist. In many instances, companies use some of the ideas that we pitch, even though they do not award the project to us.

This process can be seen as exploitation, as it is similar to asking a construction company to build a house for you, with the option of not paying for it when it’s completed. Best practices however determine that agencies should rather be vetted and awarded projects on the basis of their credentials, based on criteria such as the following:

Considering the remnants from the previous political landscape, requirements such as 20 years of agency experience and a current turnover of R50 million is completely unrealistic and just part of unacceptable reasons to exclude black agencies.

The following is a quote from another owner of a well-respected black-owned agency, who, for obvious reasons, would like to remain anonymous: ”I just wanted to point out that one of the biggest gatekeepers to the lack of transformation is pitch consultants. They are the ones who determine who gets invited to submit RFPs. As soon as the submission is received, they use a scoring sheet that is supposed to consider the factors you describe in your article, which ultimately means they have not bought into transformation.”

Even if a client specifically requested the sourcing of a black-owned agency, it is often blocked by pitch consultants’ scoring calculations and they ultimately advise the client on who to work with. Should a client insist on using a black-owned agency, it might be perceived as not following due diligence and it just casts a dark cloud (excuse the pun) over the process.”

Pitches That Require Too Much Free Creative

Most of the RFPs require that an agency submits a significant amount of free creative elements as part of their pitch. Naturally, this comes at a notable cost to the agency. In reality, a small agency would have to utilise resources towards completing these creatives, at the expense of other paying projects. Simply put, this means that you have to sacrifice paying jobs for the odd chance of winning a job that could make more money. As a result, smaller agencies cannot afford to chase every single opportunity and they have to pace themselves to selectively pitch a few times a year, subject to the resources they have available.

Bigger agencies do not have the same limitations and can therefore pitch more frequently. For us to compile this Big Pitch Presentation costs us more than R150 000, although the client paid no pitch fees for it. Furthermore takes us three weeks to complete, with the assistance of a multitude of our expensive senior resources, including two senior designers, our creative director, senior copywriter, project manager and a specialist 3D artist. In the end, we are not selected for the job, which means that we pitched at a massive loss. For this reason, we can only afford to pitch for a few projects per year.

To create an award-winning campaign is highly expensive, and one also has to pay notable fees for entering each award. Smaller agencies would therefore typically rather utilise their budget on business development efforts that will lead to business growth. Again, if you use the AdEx baseline of ad spend with black-owned agencies, it automatically implies that there are way less black-owned agencies that enter the awards, because they only get a disproportionate share of the work that is out there, in comparison to other agencies.

We also acknowledge that it is important for black-owned agencies to look at the scenario from a client’s perspective. We cannot assume that we are automatically entitled to get business, just because we are black-owned. It is important for us to have proven capability and a solid track record for delivering creatively and effectively on clients’ performance targets.

The article has also been published in the Sunday Times, 11 November 2018. 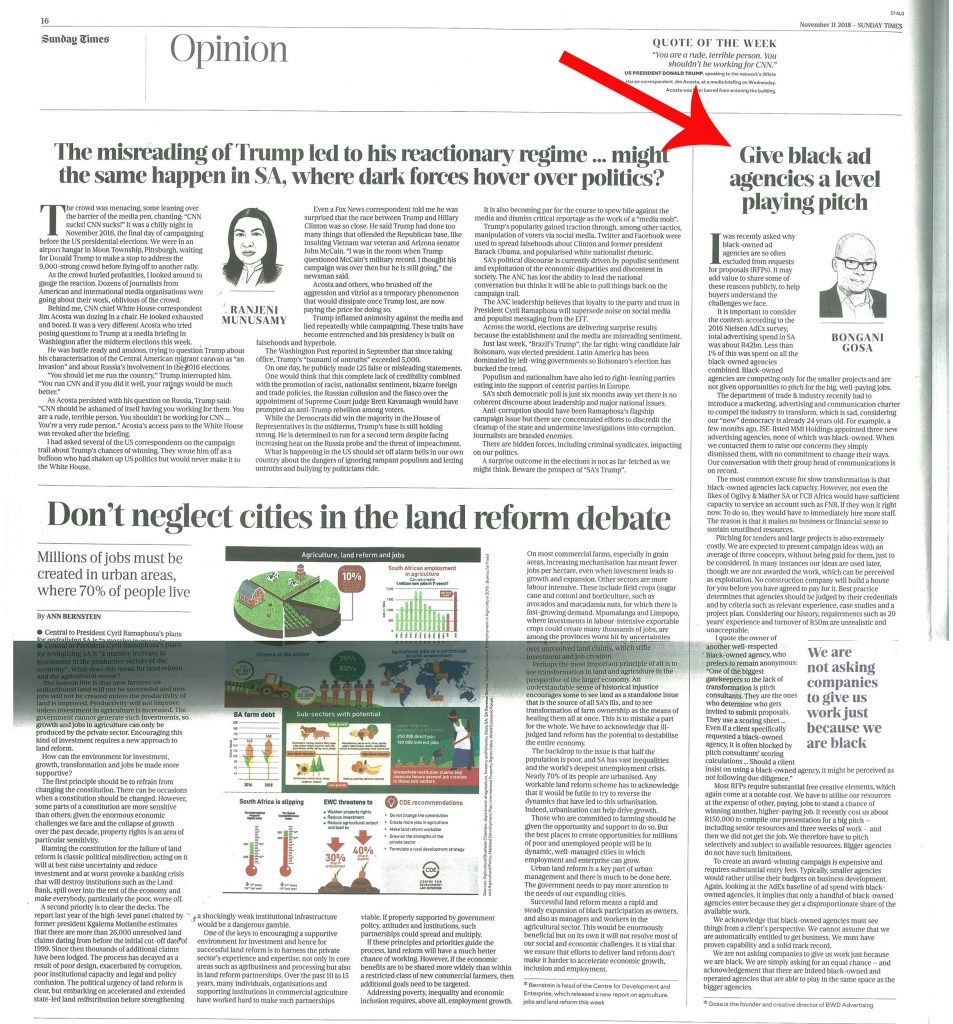