It’s a touchy subject for some, but completely necessary to explore: Here’s how Fort Review is amplifying the need to truly hear the black voices in advertising and stop being creative Jekyll and Hydes. 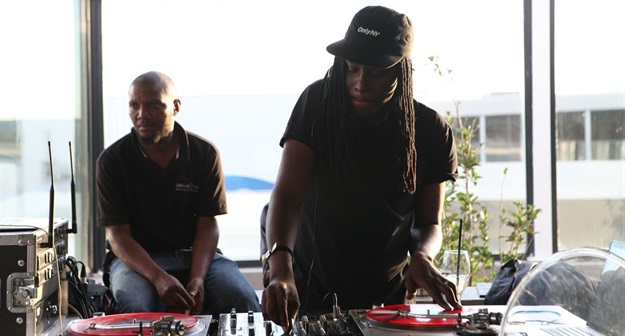 Makongoza behind the decks at the Fort Review second edition VIP launch event, at Rockets’ rooftop in Bryanston on 16 February.

Take Neo Makongoza, senior copywriter at Native VML, for example. He has worked in the industry for a decade, yet has never reported to a black creative director.

” How on earth does that happen in Africa? Most importantly, how do we change it? We’re sitting here with huge gender and racial diversity gaps in a country whose majority is both black and female, where white guys are talking to black people about black issues.”

There’s no better time than now to start the conversation. Last year, a colleague at Native VML interviewed Makongoza on the need to talk about race in advertising.

” As a person of colour, you can walk into a brainstorm with a real insight, with a real idea and how to translate it creatively, but seven times out of 10 it’s misunderstood… where marketers are looking for The Black Story more and more, it’s imperative that you don’t isolate black people “

More than this, the advertising tropes that so grate us may well have been created by strong, educated and assertive woke black individuals. The reason? Makongoza says they’re simply looking to “keep their jobs by keeping to the strategic system quo. And not disrupt it with true, sincere and insightful thinking… they become coconuts for the cause.”

[Black creatives] don’t want to be seen as revolutionaries. For anyone who comes from a previously disadvantaged family, myself included, speaking out is not something you want to do when you’re trying to feed your family.

These outdated strategic insights have created a social ignorance, which is a big part of the reason why certain products are marketed only to black people, right down to the way they are consumed.

Putting it bluntly, stereotype advertising is downright racist. For any real change to start taking place, the anomaly that is the black narrative needs to be embraced even more by our own people, and then recognised and understood even further by our counterparts.

Let’s vehemently interrogate the causes of this misinformed marketing communication and then look at strategic measurements of preventing it, all this before the actual creative idea.

Hear, hear. Let’s hope that sinks in. There’s lots more we all need to do, to properly flip the script. Keep an eye out for more on the Fort Review series, which will be made available on Fort’s website and across its social media platforms in the coming months. Also follow them on Facebook, Twitter, Instagram, Vimeo or YouTube to be notified as and when these are released.