by Veli Ngubane (@TheNduna) The creative space has witnessed YouTube’s meteoric rise as a platform for creative content. It has grown as a tool that content creatives such as Sibu Mpanza (@Sibu_MpanzaSA) have used and made a successful career out of. In this interview, he shares his dreams of shooting a documentary, how he has made money from YouTube and why he sleeps with a notepad and pen next to his bed. 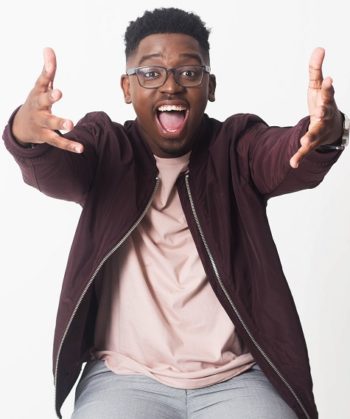 Veli Ngubane: Tell us more about yourself: where did you grow up and what did you want to be when you were growing up?
Sibu Mpanza: I was born in Mpumalanga, in a little village called Balfour where my mom’s side of the family lived. My mother and father moved to Cape Town when I was just a few weeks old. I moved around Khayelitsha and Mitchells Plain in my younger years. I went to Wynberg Boys High School where I focused on the cultural extra murals offered. I was in the choir, in most of the bands and did drama. I played percussion for the Cape Philharmonic Youth Ensemble and Cape Philharmonic Youth Wind Ensemble in my final years of high school. I was also accepted into the South African National Youth Orchestra programme in matric. I wanted to study music and travel with an orchestra but my parents would not allow it, so I studied social development and gender studies. I ended up dropping out in my final year.

VN: Please explain what you actually do and what an average day looks for you?
SM: I am a digital entrepreneur and I create content on YouTube. I have a business that creates social media content for a whole range of South African and international brands. It usually starts with answering emails and setting up for the video I am going to shoot that day, writing the script and shooting. After I’ve shot a video, I will meet with my clients and have other meetings. I am home in the afternoon editing videos and uploading. Most of my days are spent producing and editing YouTube videos. I have also recently been appointed as a content producer and co-host for a show on YFM, called Run This Town, which airs Monday to Thursday 7pm–10pm.

VN: Without giving everything away, how does one make money of YouTube; is it a viable career in South Africa?
SM: It is a viable career even though there are only a handful of us who are making good money from it. Most SA YouTubers will make money in three different ways:

VN: Influencer marketing has been the ‘buzz’; what is the future of this form of marketing?
SM: With the rise of video content creators, influencer marketing in South Africa will get a facelift in the form of YouTubers. It will move from the ‘traditional’ fashion blogger or ‘Instagrammer’. I know young people tend to connect more with video content, so it’s only a matter of time ’til we take over.

VN: How are brands getting it right and wrong in the digital space?
SM: Right: They are giving creators more creative agency. Listening to our ideas and including us at their conception and planning phases of their campaigns, not just including us at the end. Wrong: Brands still want big ideas but are not willing to pay ‘big idea’ money.

VN: Celebs are catching on, getting YouTube channels of their own. How do you feel about this, being a pioneer in the space?
SM: I think it’s fair and opportunistic at the same time. A few of us worked incredibly hard to make YouTube a respected platform for creators in South Africa. It feels like celebrities who weren’t willing to risk it before are now riding on the legwork we did. At the same time, YouTube is for everybody; you can never have too many of us. I hope this rise of celebrity YouTubers shines a brighter light on smaller creators, too.

VN: It’s Youth Month: what does this month mean to you and how do you think it should be celebrated?
SM: It means paying tribute to those that came before us. Those who lost their lives in 1976. It means carrying on their legacy. I think it should be celebrated by highlighting all the great work the youth is currently doing in South Africa. Many young South Africans have taken it upon themselves to help their communities and build their image of a better world. I think that should be widely celebrated.

VN: Tell us about your company and business journey.
SM: I moved to Johannesburg with the dream of being a full-time YouTuber. I was going to edit videos as a freelancer until I had enough money to go out on my own. Luck was on my side; a month into my move I was contacted by an agency because a brand wanted to work with me. After that partnership, I collaborated with over 30 brands during the course of 2017. It was around collaboration number six that I was advised to start a company around my business. I had never realised I wanted to be an “entrepreneur” until someone pointed out that’s what I was. The growth is quite strong for a company that is in such a small industry.

VN: What is creativity in your own personal definition?
SM: It’s a way of understanding. A way of taking your imagination and your ideas and learning how to present them in your own authentic way. I feel the only part of my job where I really use my creativity is when I take all this information I receive and package it in an informative and interesting way for my viewers.

VN: What do you feel is missing in the ad industry today?
SM: Not that it’s really missing but it could be better. I feel we need more representation of black people in decision-making roles. Many of our ads in South Africa are still one-dimensional views of black people and I think the only way that is going to change is if young black people get a seat at the table.

VN: Where and when do you have your best ideas?
SM: In bed just before I go to sleep. I always keep a notepad and a pen next to my bed.

VN: What advice can you give to young people wanting to get into the business?
SM: Don’t do it for the money. It is a long-term game. Always create content you’re passionate about. Try not to copy other people; be yourself and you will stand out.

VN: Tell us something about yourself not generally known?
SM: I have wanted to be a documentary filmmaker since I started YouTube.

VN: What exciting projects are you working on at the moment?

VN: Please would you supply two or three pieces of work that you are most proud of?
SM: My recent collaboration with Tsogo Sun.